Relocating to Denver - You Know You Want To!

One look and you will want to stay. Metro Denver has an enviable quality of life that makes it simply one of the best places in the United States to live and work. With 300 days of sunshine, a walkable downtown, thriving art and cultural scenes, and the Rockies as a backdrop, Denver offers an affordable exploration of the world's most spectacular playground.

Why are people flocking to the Mile High City?  Possibly because it has one of nation’s strongest metropolitan economies. According to MSN Money, Colorado had the Number 1 economy in the nation. Colorado saw 1.2 percent growth in its working-age population from 2012 to 2013. Colorado also had 2.8 percent growth in nonfarm payroll jobs, adding 66,300 jobs between June 2013 and June 2014. Colorado's GDP grew 3.8 percent year over year in 2013.

Metro Denver also has a population of 3.277 million people in 2013, with a growth rate that has consistently outpaced the national rate every decade since the 1930s.  This region continued to grow steadily during the past decade, averaging two percent population growth each year from 1997 to 2007.

By 2030, Metro Denver’s population is anticipated to increase by nearly 50 percent to almost 3.9 million, with 800,000 new jobs being created.

The links below will give you the basic information and resources you need to make your move to Denver.

Denver is also a city of neighborhoods, each with its own unique charm. And with such a diverse population, there is something for everyone. A great way to get familiar with the city is to peruse city government’s official site, http://www.denver.org/about-denver/denver-neighborhoods/ to learn more.

Denver is in the Details

Peruse some interesting facts and get the tidbits of information you need before you visit. Details like Denver is one of only two cities in America with eight professional sports teams. And essentials like where to locate the exact elevation of 5,280 feet (1 mile) above sea level (a round brass cap embedded in the western entrance stairs of the State Capitol marks the spot). The more you know before you get here, the more time you can spend taking it all in.

Be informed on your child's future educational development. Find general information about the Denver Metro Public School system, most current facts and figures, links to current public information, archives of press releases, an image library, board and staff biographies, and much more.

The mild climate surprises many people; don’t be fooled by the occasional winter flurry – Denver is nestled at the base of the Rockies, not in them.  Winters are mild with an average daily high temperature of 45 degrees Fahrenheit and days reaching 60 degrees are not uncommon.  Snow doesn’t stay on the ground long in Denver so golf courses and outdoor cafes are able to stay open all year.

In summer, Denver enjoys low relative humidity, making for beautiful, sun-filled days and cool, comfortable evenings. The average daily high temperature in August is a mild 86 degrees Fahrenheit.  The mild weather is due in part to the city's altitude: 5,280 feet above sea level, or exactly a mile high.

Finally, if you still need additional information about the Denver Metro area, please check our list of some great Denver web resources. 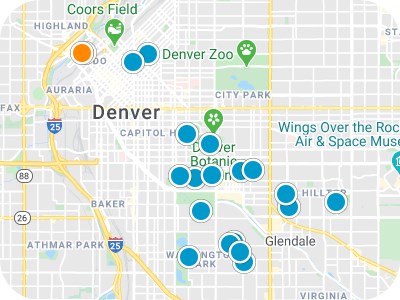